I'd painted up a company of M1 Abrams in MERDC some time ago and I finally got around to basing them today as part of my plan to clear the painting table (my kitchen table actually) ready for my 1985 French Armoured Division project.  For MERDC I have used Vallejo Russian Green, Iraqi Sand and Dark Earth with Tamiya NATO Black.  I should be able to use these for early M1s issued as replacements for M60s to either the USMC or US Army in Europe.  Not sure of the manufacturer, I think Heroics and Ros, but am not sure, the turrets are slightly longer than the Scotia models I already have. 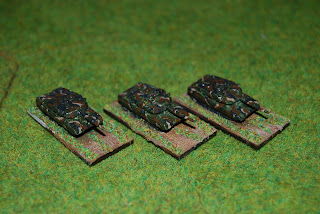 I have also used up several packs of US Infantry and Infantry Support in Fritz helmets from Heroics and Ros for my USMC force and was left with a handful of infantry, a stands worth of HMGs and 4 stands worth of TOWs, so I decided to base up the HMGs and TOWs as a start on my longer term project of putting together some US armoured and mech infantry for the 1985 period.  1985 is an interesting time as I think it's still possible to use MERDC scheme M60s and M113s, M1s and Bradleys in MERDC and in three colour schemes, which then lets you model older and younger units from the same basic models. 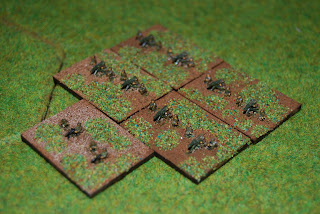 Next up, early WW2 British and German armour and some late war Brits.

Thanks for looking.
Posted by Andy Canham at 18:33