My first game of the weekend was an Arc of Fire game umpired by Richard Phillips.  It featured a four way struggle to locate and secure a NASA satellite which had crash-landed in the Eastern Hills of the fictional Black Sea country of Andreivia.  This troubled country, one of the UN's youngest countries in 1992, was facing a struggle for it's existence with the legitimate government, bolstered by support from NATO (mainly the USA, Great Britain and France), fighting a vicious civil war with Andreivian rebels of Turkish and Armenian decent, further complicated by a Russian peace-keeping mission (or invasion) in the north of the country.

The satellite had crashed overnight and local foreign fighters (Mujahedeen) had located the crash site, but had no means to move it readily to hand.  A platoon of British infantry mounted in Warrior APCs would enter the search area from the lower left corner of the board, while a platoon of VDV Russian paratroopers in BMDs would enter from top left.  Later, an Andreivian force with infantry mounted in locally modified T-34 APCs and Chieftains would enter from the lower right.  The local Mujahedeen held the central village and had reinforcements coming from top right.  A surprise was the JS III the Mujahedeen had in the village, along with an armoured car, and the two more JS IIIs in reserve. 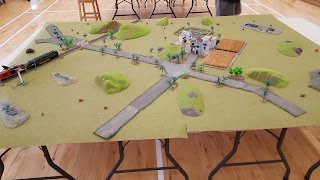 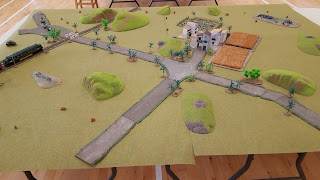 The day before the satellite landed and Andreivian Govt paramilitary units in BTR-40s patrol the village with nothing unusual to report. 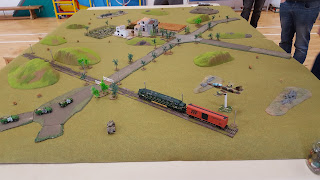 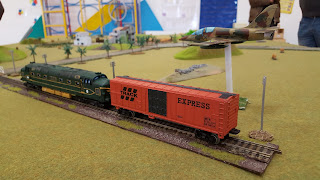 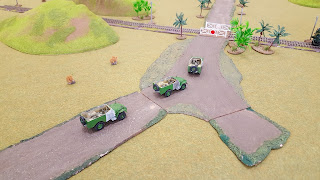 Crop fields, possibly hemp for the rope industry, that or cabbages! 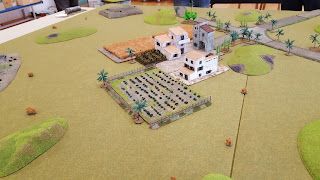 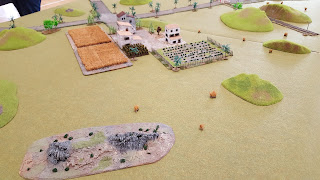 The satellite we were all looking for. 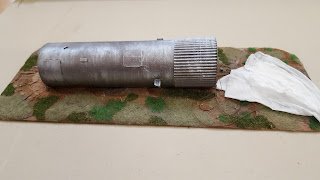 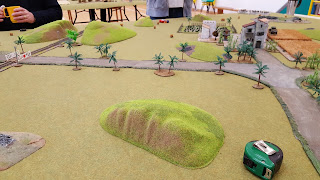 And we're off.  The Warriors, three with infantry sections and one HQ and a support unit of Milan ATGMs. 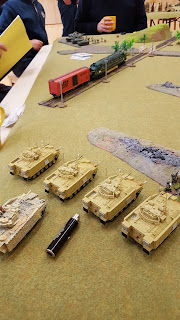 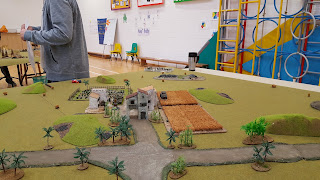 NATO push a Warrior team out to their left to keep an eye on the Russians. 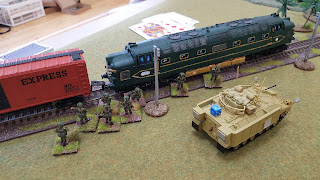 And deploy their Milan teams on a hill overlooking the centre of the table. 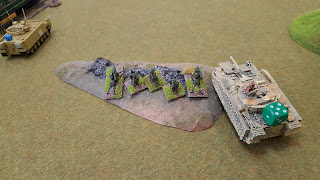 The HQ section deploys on a hill overlooking the approaches to the village while another mounted section approaches the woodland at the edge of the village. 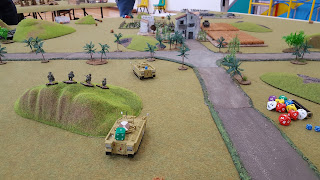 The last Warrior team swings out wide to NATO's right and takes up a hull down position watching the armoured car. 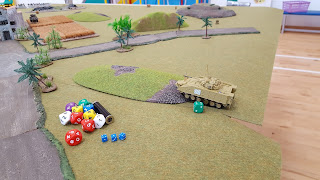 A tank, looming out of the heat haze in the distance, is mistaken for a JS III and is struck by a volley of Milan ATGMs, causing it to erupt in flames.  Only when the dismounted infantry crossed the railway line did they realise this was a Russian T-62. 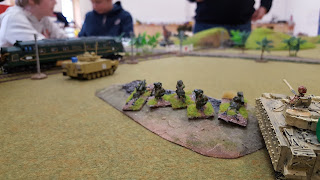 Moments later the lead Warrior opens up on the armoured car, with similar results. 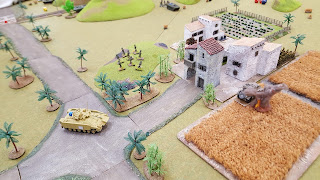 Secondary explosions rip through the light armoured vehicle as the ammo cooks off. 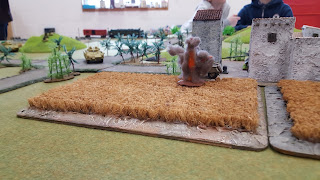 The infantry in the lead Warrior dismount and advance over the low hill towards the village, only to be cut down by a storm of AK-47, PKM and Dushka HMG fire.  Six dead and two ijured being the result. 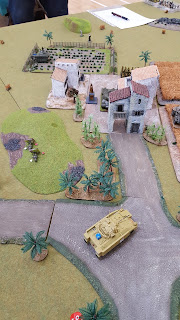 The lead Warrior comes under JS III fire from through the village archway, with AP shot flashing past, while the right flank Warrior in the foreground observes civilians advancing down the road from the right, clearly ignoring the obvious shooting going on in front of them. 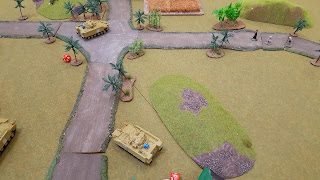 A Russian BMD appears behind the JS III in the village. 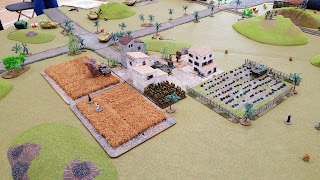 The rest of the Russians seem to be content to secure the railway cutting and stay out of harms way. 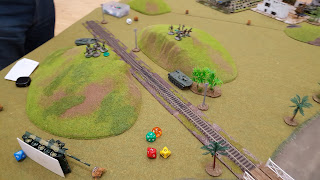 The lead Warriors luck finally runs out and the third shot from the JS III KOs it for good. 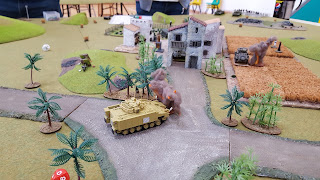 The Mujahedeen receive two more JS IIIs as reinforcements.  On arrival, these brew up the BMD that was threatening the JS III in the village. 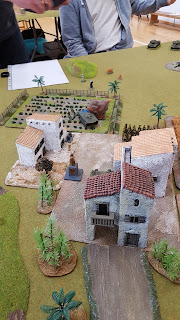 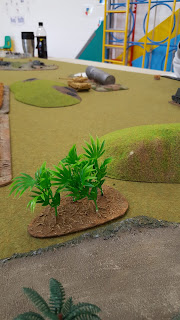 The JS III in the village moves to the crest of the low hill and fires on the HQ Warrior, which is immobilised. 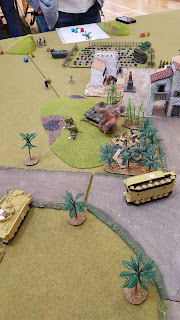 The excitement must have been too much as I stopped taking photos at this point.  This may have been a "no witnesses" action, as the right flank Warrior found it necessary to turn its autocannons on the civilians who kept advancing toward it.  At the same time, a Challenger 1 reinforcement advanced down the road to the village and traded shots with the JS III, eventually brewing it up.  Russian reserves included a T-55 and BRDM-2, which advanced along the road towards the village under the noses of silent, for now, British Milan teams (they were too close for the Milans to arm in flight).

The Andreivian Govt lost both their Chieftains to the JS IIIs that came on from reserve, but the T-34s dragged the satellite to the edge of the table.  They thought it was in the bag, until the British Challenger appeared and they received radio messages from the president of Andreivia instructing them to co-operate with the British in securing the satellite.

This led to partial victories for the Andreivian Govt and NATO, and, surprisingly, for the Russians, as their orders were to stay out of trouble and keep out of the way (despite the loss of their T-62 and a BMD.  I'm not sure what the Mujahedeen player was ordered, but have to assume it was to prevent recovery of the satellite.

In all, I think we completed 13 or 14 full turns on the Saturday, which was treble the usual rate and a real tribute to the great spirit in which all the players participated, especially the two youngsters commanding the Andreivian Govt forces, and the excellent umpiring by Richard.  So a great first game, lots of fun and some real challenges.

Thanks for looking.
Posted by Andy Canham at 23:48