I managed to get these off my phone at last. A game from back in February, 10 players, four Brits, one US and 5 Germans on 20ft of table.  A straight up beach assault.  Looking along the table, I had the German left flank, closest to the camera.  I placed my two 75mm PAK40 bunkers on each flank facing inwards, covering the two sea wall 50mm PAK38 bunkers.  With some wire and entrenchments scattered about, there were lots of obstacles for the attackers.  I also had a couple of 88mm AA guns back in the village (lower right). 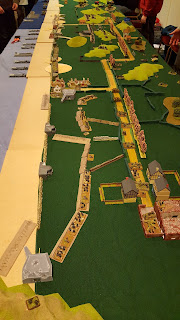 The view for the Allies from the landing craft! 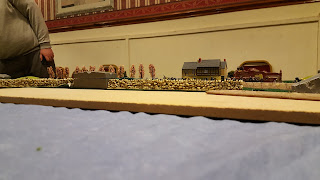 The beach view from the opening of the extreme left hand PAK40 bunker.  Dennis is sitting in the middle distance working out how densely he can pack his assault armour - unfortunately, he managed to lose or immobilise most of this while straying in the minefields. 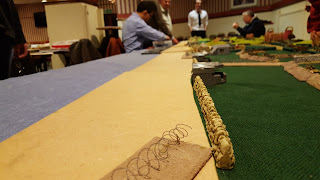 The empty rear of the German defences. 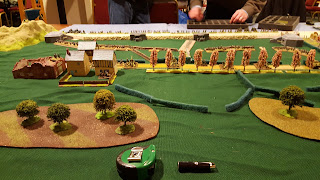 The scene about 3 turns in.  Ian's AVsRE have knocked out the closest PAK 40 bunker and eliminated the entrenched infantry, but a pair of Stugs are engaging them from the flank, knocking one out in the first round of firing. 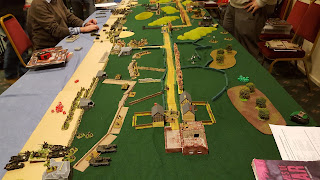 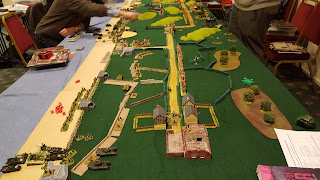 The whole length of the table. 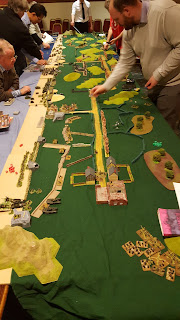 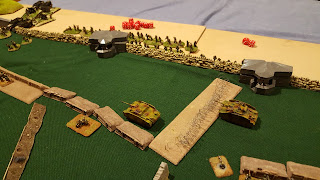 Dave's armour in the next sector, pretty much stalled at the HWM and largely reduced to Priest SPGs. 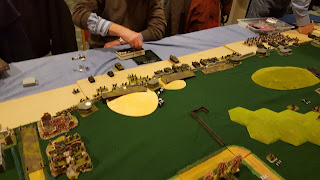 Dennis with his troops also pretty much hung up at the HWM. 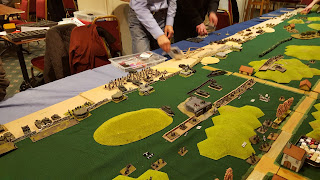 The action was pretty intense, but a fun game.  My Stugs got the range of the AVsRE and knocked one out before we ran out of time.  Ian's infantry were gradually working their way off the beach, but weren't likely to have much armour support as the Stugs were about to have another crack at the surviving AVRE.  However, Ian's AVRE made the deepest inland penetration of the game, so he felt fairly happy.
We were pretty pleased with such a great looking table set up in around an hour, although the rate of play was quite slow, as is usually the case for such a big game.  Lots of fun though and nice to see it all laid out.  It was also the first chance for me to use my bunkers since I bought them, more years ago than I care to remember.
Thanks for looking.﻿
Posted by Andy Canham at 16:59