The second Arc of Fire game that I played in on Sunday was set in the capital city of Tcherbevan, separated from the airport by the Krupnehr River.  This involved NATO, Andreivian Govt, Armenian rebels and Russians and was once again very well umpired by Richard P, which made the game really flow smoothly.  The airport dominated the northwest, while to the east were the railway marshalling yards, shown below. 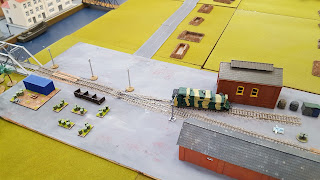 This view shows the airport (the runway was laid down between the two lines of trenches as the game started.  The hanger is a converted Thomas the Tank Engine toy building. 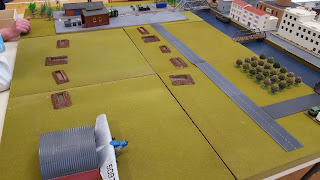 The Turkish quarter - scene of bitter fighting last year between Turks and Armenians.  The white building on the left is the Italian Embassy, seized by a British helicopter assault in the last move of last year's game., with the Culture Ministry beyond. 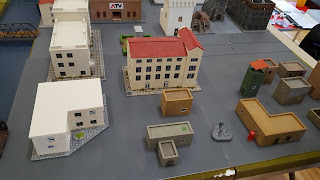 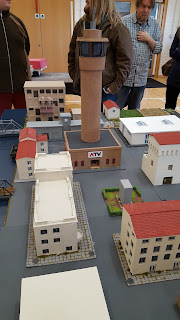 Tcherbevan viewed from the Armenian quarter. 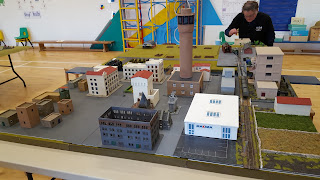 British troops, deployed in the Italian embassy, fire on an Armenian terrorist group which just offloaded from boats just off table.  Unfortunately, this was right under the noses of the British and also several units of Andreivian paramilitary police and militia manning BTR-40s used as road blocks. 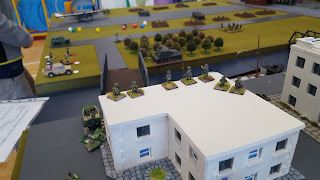 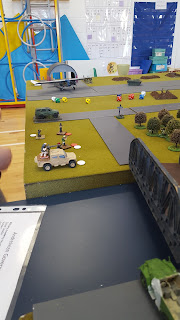 Russian BMDs and BTRs plus a squad of Spetsnaz on foot make a move on the railway bridge, via the marshalling yards, and the footbridge.  The Spetsnaz are closely watched by the Italian sniper team in the ATV tower. 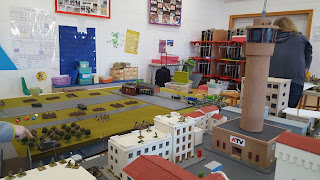 The Armenian technical brews up under Charlie G fire from the Italian embassy and the squads bottle goes and they flee. 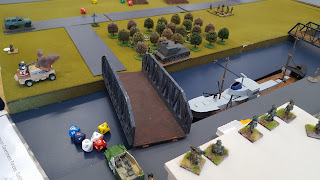 Andreivian police in a BTR-40 move in front of the USMC base in the old Ottoman fortress in the Turkish quarter, while the USMC AAVP-7 moves up on another group of Armenian terrorists who have been rash enough to leave the relative security of the supermarket behind the English Church.  The marines have just intercepted an ambulance on the Culture Ministry Boulevard, which was carrying AT-4 missiles for the Armenians. 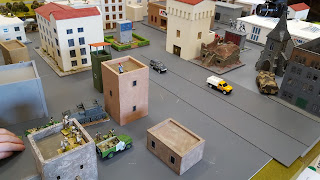 Italian special forces in the ATV building rip in to the Armenians, who are having a truly terrible day. 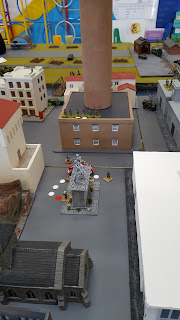 The Andreivian police are now being reinforced with an Andreivian militia unit in a locally converted T-34 APC, which is also crossing the Culture Ministry Boulevard.. 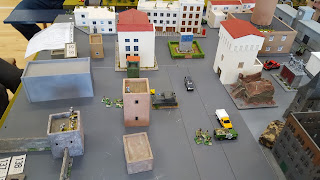 The British had despatched a rifle team in a Saxon APC to search the Mill, across the river from the marshalling yards, acting on a tip off from a reliable source.  They debussed the Saxon at the railway station and crossed the lines to enter the Mill, finding the UN Special Envoy, the Dane, Anders Blix, cowering in the basement.  Taking him in tow, they then head away from the river to rendezvous with the Saxon, which had to survive a wild shot from a Sagger missile mounted on a Russian BMD across the river.  Anders tells the Brits that their two SAS men, captured in a previous game, are being carried into the city by Armenians in a civilian 4x4, which they radio through to their commander and this is subsequently broadcast to other NATO units in the vicinity. 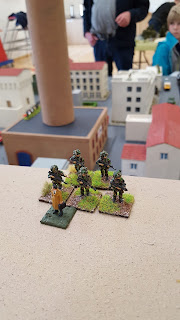 While the British rescue Anders Blix, the Spetsnaz attempt to cross the footbridge (centre right), but the Italian sniper team has called in a NATO artillery strike on the approach to the bridge.  Next to the boat moored on the river, a green SUV approaches.  This vehicle was stopped earlier by an Andreivian APC, but the crew decided not to debus and search the vehicle, just speaking briefly with the Armenian accented driver and waving him on!! 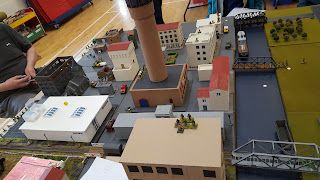 Meanwhile, the British usher Anders along the railway lines, careful to hug the cover of the buildings. 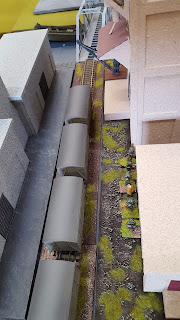 The Saxon waits patiently for the infantry with Anders Blix to move up the railway.  Beyond the level crossing, a bus has been stopped by the AAVP-7 and dismounted USMC have searched the bus, discovering the Andreivian Govt agent who has rescued the data from the crashed satellite.  He is taken into protective custody and loaded into the APC.  In the background, Andreivian police and militia try and muscle in on the action, but are still out of reach. 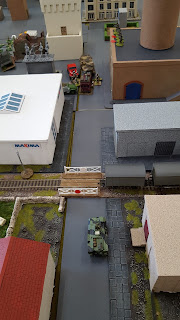 The Andreivian militia T-34 APC can be seen chugging around the front of the English Church.  With NATO's help, the Andreivians have eliminated the Armenian terrorists operating in the area. 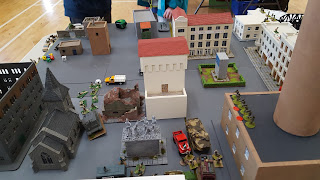 The USMC stop and search, right under the noses of the Andreivian police BTR-40.

The Spetsnaz cross the river, despite taking losses from NATO artillery and Andreivian and British fire from the riverfront buildings.  They stop and search the SUV and discover two bound and gagged figures in the boot.  Before they can act, fire from the remaining Andreivian police in the Culture Ministry and the British HQ in the Italian Embassy kills or drives off all the surviving Spetsnaz, leaving the bound captives lying in the street.. 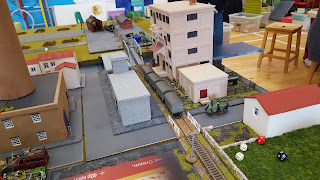 Next action they mount up and the Saxon speeds off towards the British commander in the Italian Embassy. 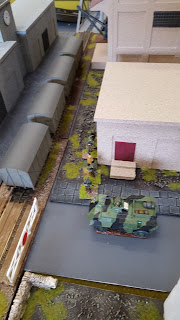 So, a fun game, the Andreivians cleared the city of Armenians and kept the Russian on the airport side of the Krupnehr River.  NATO assisted the Andreivians in clearing the city and in rebuffing the Russians.  NATO also managed to locate Anders Blix and the British evacuated to him to safety, while the USMC were able to intercept the agent carrying the satellite data into the capitol and took this and the agent into custody, just ahead of the Andreivian police.  Unfortunately, the game ran out of time with the two SAS captives lying in the street outside the Culture Ministry, in full view of Russian forces around the airport opposite.  However, it is to be hoped that, if not before, during the hours of darkness, the British in the Italian Embassy might be able to bring them under cover.  The Andreivian police in the Culture Ministry and Italian Special Forces in the ATV tower both have their hands full dealing with wounded policemen and soldiers.

It was a great weekend of gaming in some good company, along with some great pies and beer at the local pub, The Royal in Dungworth.  We're already planning next years weekend, which currently looks like it will explore events in Andreivia after the Great War.  This should include elements of the British Empire and other western nations, the Ottomans, the Red Army, local Andreivian militias and anyone else we can provide a back story for.

As ever, thanks for looking.
Posted by Andy Canham at 08:19