This week I have mostly been working on some more 20mm Afrika Korps vehicles, mostly resin castings from Andy Grubb (Britannia Miniatures), which I picked up mail order and at various shows.


First up, a pair of Panzer IIs.  The troop commander is a Plastic Soldier Company figure - he's obviously finding the hatch a tight squeeze, so must be very broad shouldered.  In addition to the stowage modelled on the original castings, I've added some tools and tarps from Sgts Mess. 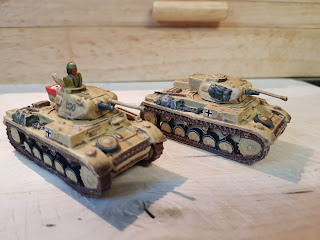 I went with a Vallejo dark sand base colour, washed with Agrax Earthshade.  Tracks, metal tools, rubber tyres and MGs are in black grey.  Tracks are Tamiya metallic brown and Vallejo flat brown mixed.  Tarps are medium grey or field grey.  The commander's uniform is yellow green mixed 50:50 with Iraqi sand.  Black grey for headphones and wires.  Pink (white with a hint of red) and khaki grey for the Waffenfarbe.  I used Vallejo old rust pigment to distress the exhaust pipes and silencers. 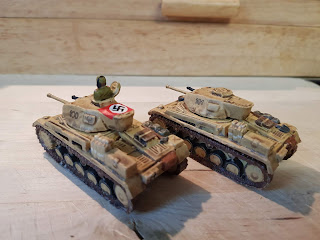 Decals are I-94 for the iron crosses, vehicle numbers and air recognition flag, Plastic Soldier for the Afrika Korps insignia. 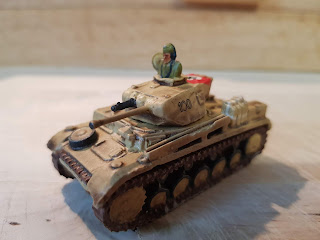 Overall, I was pretty pleased with the final look to these.  Sadly, I'd planned to complete the platoon with a diecast vehicle that I picked up at the bring and buy at a show - forget where now.  Sadly, the colours are so different (and the diecast colours are hard to find a readily available match) that I shall allocate the diecast vehicle to recce duties and add a third Britannia vehicle, so the platoon retains a coherent look.
﻿ 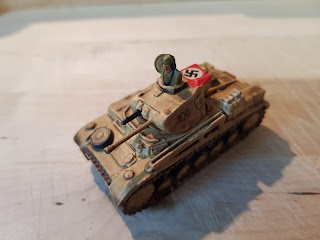 Next up, an Early War Miniatures Horch staff car, picked up for £1 from the miss-cast bin at the Phalanx show.  It's missing the front bumper and windscreen and needed some TLC to restore a large hole in one of the wheels, but some Milliput worked wonders.  The seated crew are from Britannia. 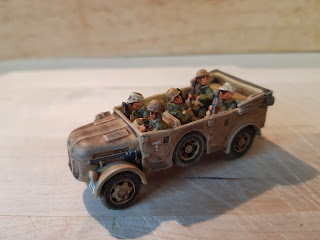 Decals were again Plastic Soldier for the Afrika Korps insignia, but Skytrex for the vehicle licence plates. 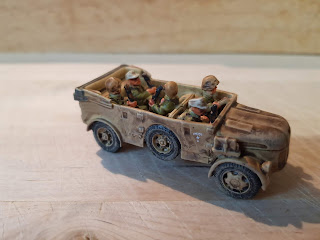 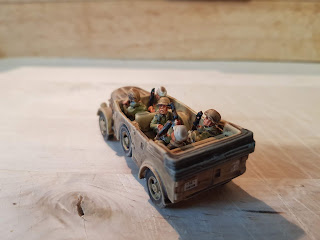 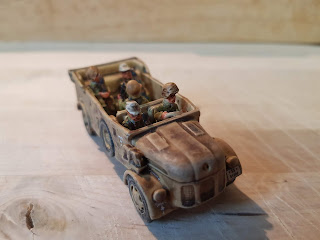 Next, some light AT guns in the form of 2 PAK 36s plus a single Kettenkrad to tow one of them. 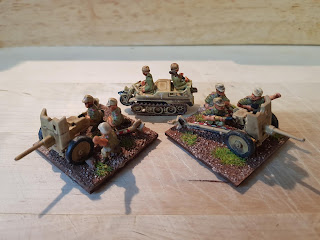 The two PAK 36s are Britannia Miniatures, as too are the crew.  I found assembly of the guns a bit fiddly and it would be great if Grubby added some assembly instructions on his web site.  The figures were lovely and really straightforward to paint.  I've tried to show some variability in shirt colour, reflecting fading in the sun, while hats range from desert yellow to ivory, to indicate "old hands". 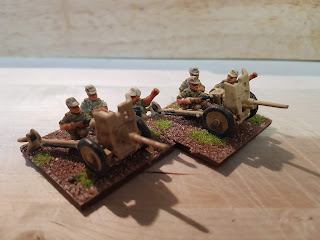 Finally, this is the Linberg Kettenkrad kit (ex-Hasegowa?) that was being sold last year for a fiver, along with a Schimmwagen, at Home & Bargain across the U.K.  This was a nice little kit, lots of swearing as it's pretty fiddly, but I wish I'd bought some Britannia crew for it, as the figures supplied look really stiff and unnatural. 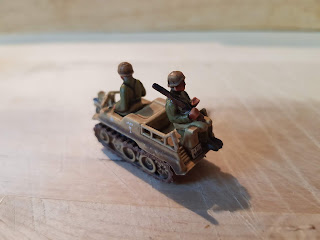 Decals are again Plastic Soldier for the insignia and Skytrex for the number plate.  Front number plates are hand painted.  I might order a pair of Kettenkrad from Britannia to tow the PAK 36s and add a trailer to this one to transport a signals unit. 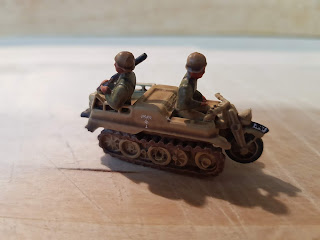 Lots more in the pipeline.  I've finished a company of DAK infantry - just need to take some pictures, and still have to photograph the DAK Panzer IIIs and IVs.  The painting table is currently split between some bargain Battlefront 15mm DAK and US vehicles, a box of PSC US Shermans and the first of my new Strelets boxes of Ottoman camelry.  I can feel the need to paint some camels coming on swiftly, so need to make way for them soon.