At the last club gaming Saturday, Will and I played out the Crisis at Wailly scenario from Rapid Fire! Blitzkrieg Battlegames, using Will's 20mm collection and Rapid Fire! Reloaded.

Turn 3 or 4, view from Berneville in the foreground.  7th RTR is fanning out towards the south and the village of Wailly in the centre of the board, which is about to be hastily garrisoned by Will's infantry. 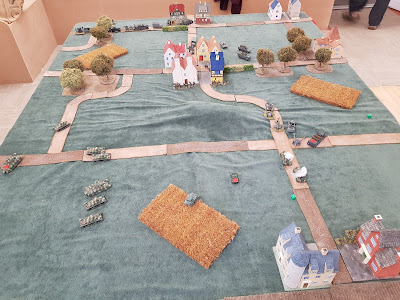 View to the northwest.  The German motorized infantry column on the road top right, with vanguard units deploying in the centre around Wailly. 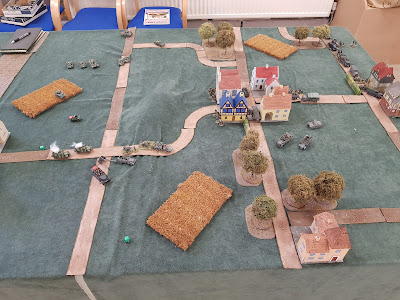 As the British player and newbie to Rapid Fire! Reloaded, I made some basic mistakes.  The Brits lost their superior recce advantage by moving and firing at the vulnerable German towed guns, I should have stopped at the board edge and blasted away at full effect - that way I could have moved on Wailly earlier and prevented the German infantry getting too great a hold.  Secondly, I realised too late that to knock out artillery crews, it is necessary to knock out all the crew (3 or 4 figures) in a single bout of fire, rather than being able to whittle them down.  Coordinating artillery with vehicle and infantry attacks might have worked better.

Even so, the 7th RTR bypassed Wailly, around the right flank, while providing supporting fire to the infantry, also moving up that flank.  Eventually, the game came down to trying to get 2 vehicles off the German end of the table, resulting in Matilda 1s and IIs racing at a snail's pace down the right flank, getting picked off by 88mm and 105mm long range fire.  Two Matilda 1s made it to Blairville, only to encounter a light AA gun on reserve fire, which promptly damaged one of the Matildas, leaving it in full view of the rest of the German guns next turn.

An interesting scenario and one I'd play quite differently given another opportunity.  Lots of fun and a big thanks to Will for providing everything bar dice and a tape measure.