Some of the Cold War Commanders ventured into deepest, darkest Staffordshire, to Richard Phillips new gaming venue at Stone, the Unit, situated in a converted barn.

The scenario involved NATO covering forces trying to hold up a Warsaw Pact advance, NATO being allowed a reinforced recce battalion per player and the pact a tank or motor rifle regiment.  All terrain courtesy of Mr Phillips and in 6mm as usual.

My playing area with squadrons of scimitars and scorpions in the fields next to the power plant (centre left), which was garrisoned by my recce infantry platoons in Spartans held in ambush.  Another squadron of scorpions and scimitars is lining the wall around the airport perimeter, as too is a reinforced squadron of Chieftain Mk10s.  A third scimitar/scorpion squadron is lurking in the woods near right, along with the CO and all of the squadrons Strikers.  My opponent, Mark J is bringing his first battalion of BTR-60s with attached T-55s on at the far end. 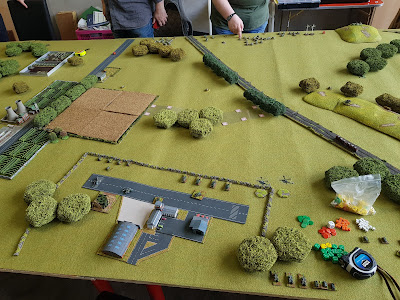 The whole table, must be 24ft+x5ft.  The Cold War Commanders author, Mark F in blue shirt sitting at the far end on the left. 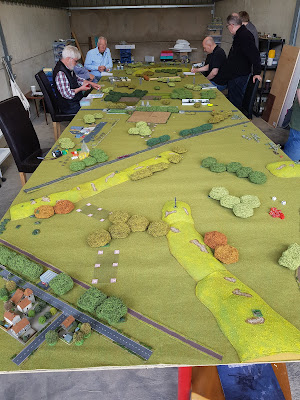 Turn 3 - my Strikers have somewhat surprised Mark Js first MR batt, taking up firing positions behind the railway embankment and firing as many times as orders permitted, although his third battalion is advancing - behind his hands and rule book, so I'm moving the Chieftains up in support, having lost a Striker to artillery fire. 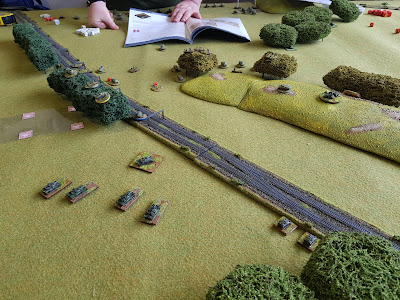 On the left, Mark's second battalion has made fast progress, so a mixed scorpion and scimitar squadron has moved up to support the other on the edge of the field. 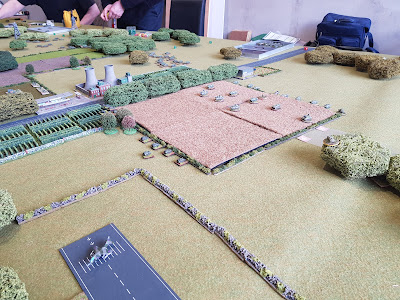 An inquisitive West German recce troop has moved up (right hand edge) to see what all the gun and ATGM fire is about. 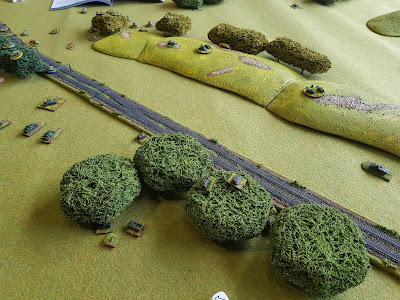 Turn 5 and the Chieftains have left the Strikers to deal with Mark's second battalion using long range ATGM fire, while a mixed Scorpion/Scimitar squadron is moving up to mop up the remains of his first battalion. 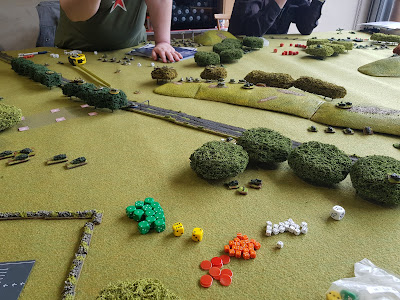 The Chieftains still have a long way to go to influence the fight on the left flank.  Over on the far left, the ambush was sprung by Chris's T-64s moving on Alan's Belgians and a salvo of IATW scratched two tank platoons.  At the edge of the field, Mark's second batt is trying a combined arms attack and the defending recce squadrons have popped smoke in preparation for a hasty pull back. Sadly, we had reached the end of the day, with NATOs left flank pulling back in disarray as the Dutch and Belgian contingents were unable to hold.  With the Belgian contingent pulling back, my left flank would have been in trouble as they were already falling back on the airfield perimeter.  Only the West Germans on the right, plus the somewhat devastating Strikers, were still holding out.  This at least in part due to Ian S, the West German opponent, rolling more than his share of 11s as command rolls early on in the game.

Lots of fun and a good try out of Cold War Commander 2.  I'm still not a fan of aircraft hitting on 6s, which makes them rather ineffective for all the trouble they go through to deliver their ordnance and the points cost.  Dedicated ATGM are now well worth the points, particularly when in defence, although the low save and hits mean they are brittle.  Popping smoke as an opportunity reaction to movement or fire was certainly useful as well, both for the defender and, if used well, for the attacker.

Thanks to Richard P for organising the venue and laying on the fish and chips lunch - went down very well.  Thanks to all the players, I think everyone had a good time, I certainly enjoyed myself.