Last club Saturday gameday was a brilliant Aliens inspired game using some house rules developed by Dave, Mick and Paul at the club, inspired by Force on Force, Space Hulk and Zombicide.  A distress call had been recieved from colonists on a mining world and a squad of marines was despatched to effect a rescue.  Preliminary satellite images showed no recent activity in the industrial plant! 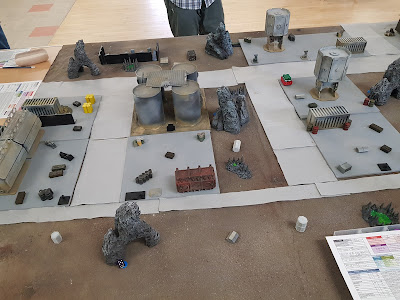 Hastily erected sand bag defences were thrown up around parts of the landing pad, with early images suggesting they were manned, but later images suggesting no sign of human activity.  (Dropship and figures added for eye candy). 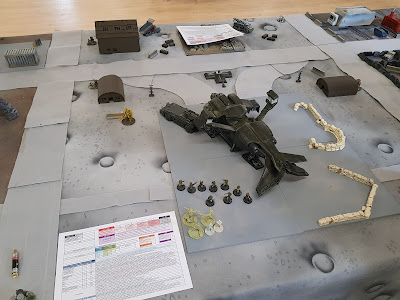 More eye candy - Dave was working on this until the wee hours, getting it ready for the game. 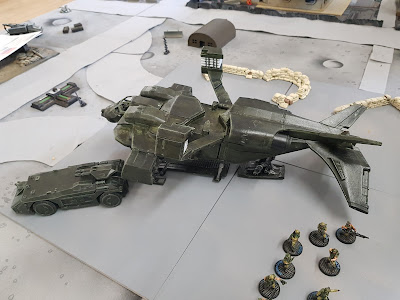 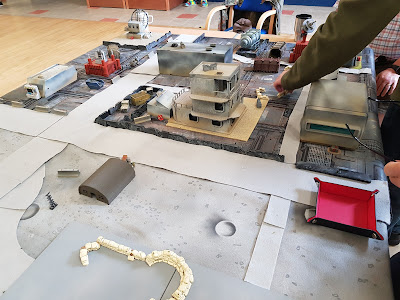 All power appeared to be out, as no lights were on, so the squad I was part of were assigned to restore power and comms.  The dropship hit the pad and the apc rolled off, swinging towards the camera to drop my squad off.  Our mission, to restore power at the building on the right just beyond the red electical substation and realign the colony radio dish just off table near right.  Then cross to the central comms area and establish comms (two storey building next to the landing pad). 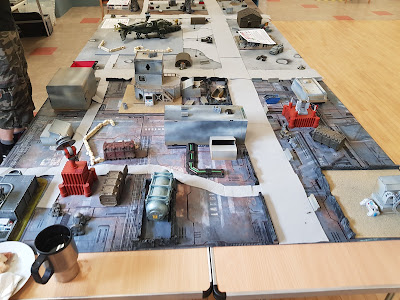 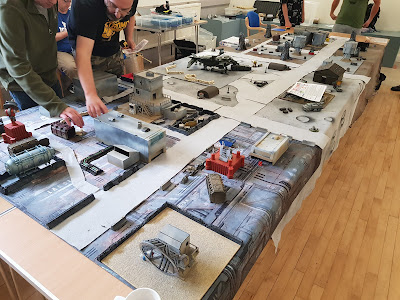 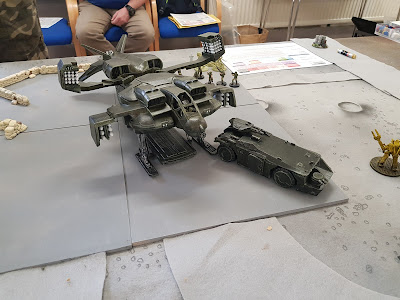 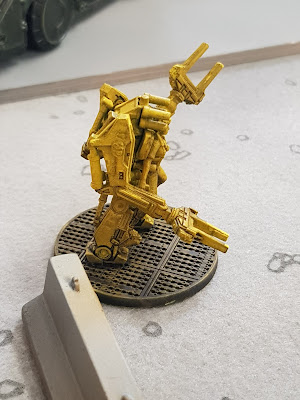 The team dismount the APC, me (Hudson) at the back, Mick (Apone) in front of me, Little Si (Vasquez) on the right and Paul (?Dietrich) in front.  Mick and I had pulse rifles, Little Si the Smart gun and Paul a flamer. 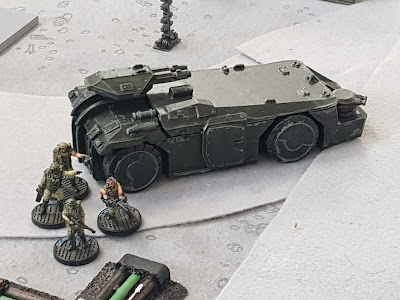 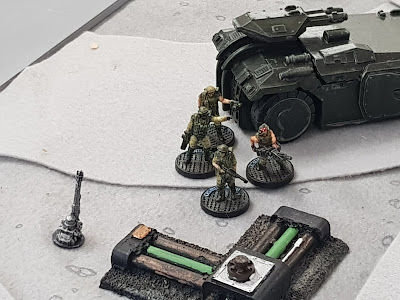 As we move towardsw the power plant, the apc trundles off carrying the other squad (Dennis, Will, Ryder, Phil and Nathan) to look for the colonists. 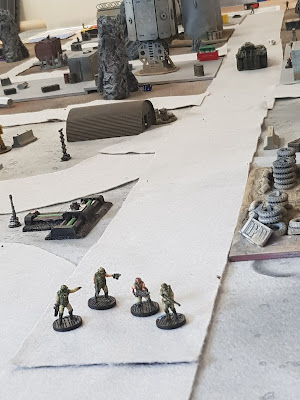 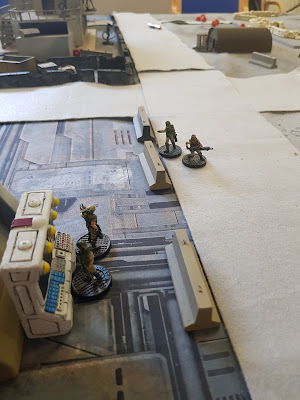 Mick and Little Si overwatch as Paul and I try to get the power back on. 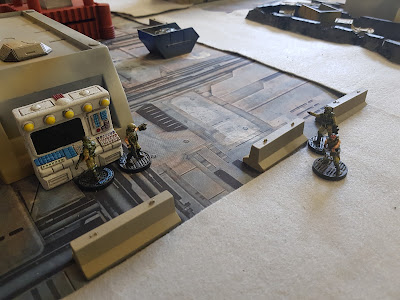 Shadowy movement in the darkness. 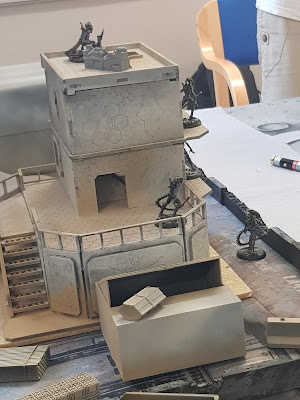 The first blip comes into view and an alien is chewed up by overwatch fire while another goes down stunned. 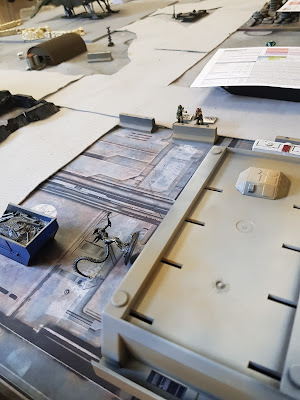 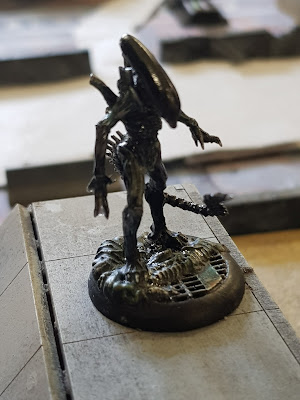 Our team trying to look in every direction at once and feeling decidedly jumpy. 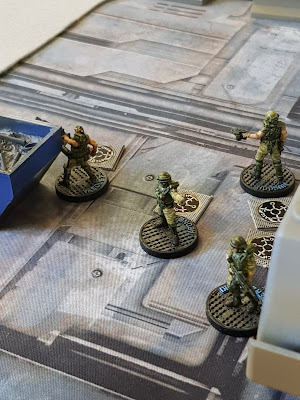 More aliens appear as we move towards the radio dish, Paul fries them. 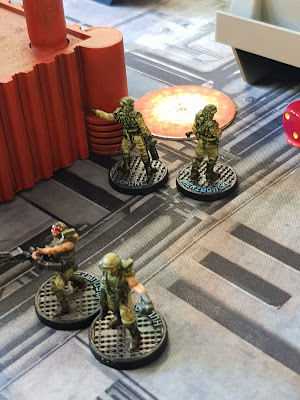 An alien ambushes Little Si, who's able to sidestep and allow team mates to deal with the threat. 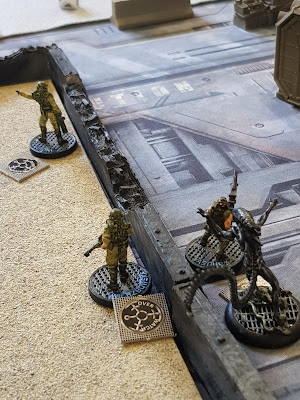 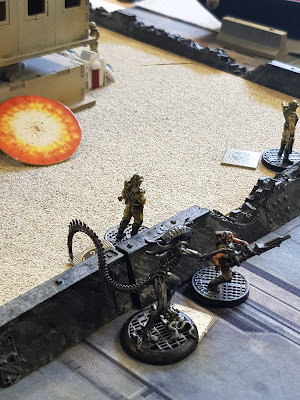 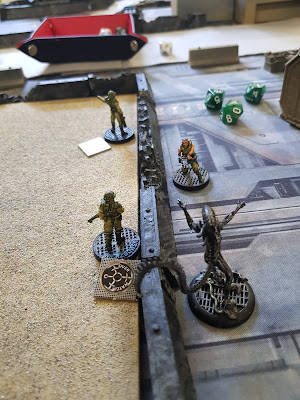 Once the dish is realigned, the squad moves towards the comms centre, right into the path of a host of advancing movement blips.  We have to move fast as there are even more blips coming from the left of the building. 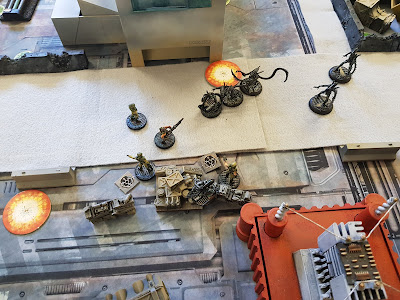 The squads weapons deal with the oncoming hordes as we inch forwards, trying to keep out of sight of the oncoming aliens to our left, who will charge if they see us. 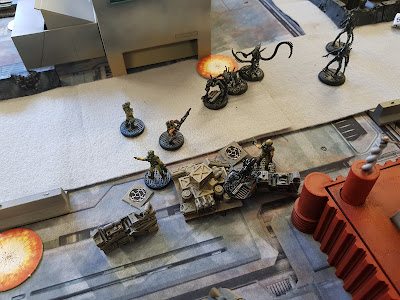 We get around the corner and arrive at the Comms Centre, fighting off aliens in front and behind, but a raft of alien ambushes trigger a crisis point for the squad with Little Si, Mick and I all threatened with aliens springing out behind us. 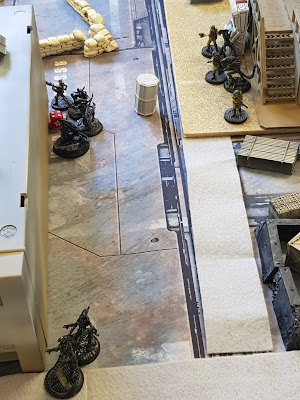 Some nifty footwork and good shooting kill or stun the alien ambushers, buying us some time to head off towards our final objective (the grey building top left).  Once again, pursuing blips come into view as a horde of aliens come rushing towards us. 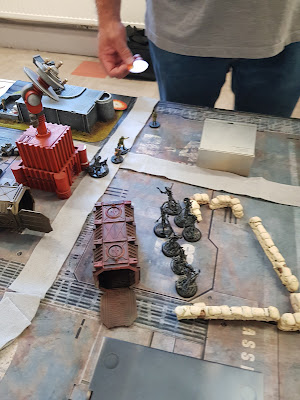 Fire from my three squad mates enables me to make a dash for the next objective, although I fail my tech test to activate this turn (I'm out of sight behind the red building). 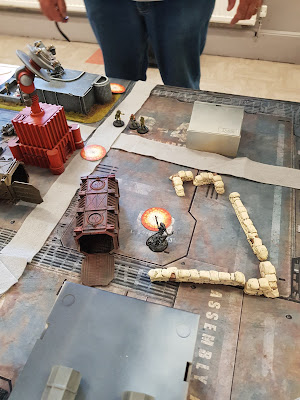 There was some hectic action at this point as aliens poured out of the objective building and headed in my direction.  I pulled back out of charge range and my team mates eventually dealt with them, allowing me back to the control panel to activate the objective and establish comms with the drop ship, the other squad and orbitals.  The other squad were heading back to the landing pad with some rescued colonists, with a massive comet-like tail of movement blips strung out behind them.  The drop ship was called to rendezvous and we headed back to the landing zone as fast as we could.  As we moved off, huge clanging and banging noises erupted from a building at the edge of the landing zone and a huge four-legged, alien warrior emerged, along with several of the more regular aliens.  Our squad stuggled to reach the improvised defences on the edge of the landing strip and opened fire on the oncoming aliens.  Sadly, Little Si managed to jam his smart gun and then wreck it in an attempt to clear it, but grabbed a nearby pulse rifle and opened up with that instead. 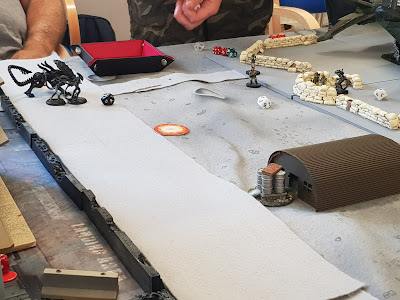 The other squad had, by this time made it to the refueling depot and attached a pipeline to the dropship, which was running low.  Aliens were appearing all around them and the multiple movement blips in the distance were getting closer and closer. 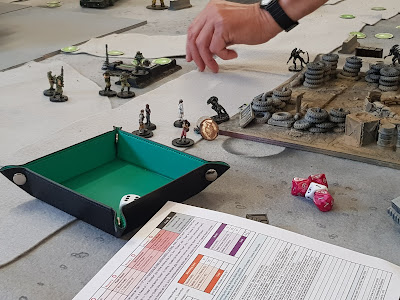 The big picture, our squad on the left confronting the huge warrior, the other squad taking on the oncoming aliend hordes, plus an alien queen emerging from a nearby warehose (off picture to the right). 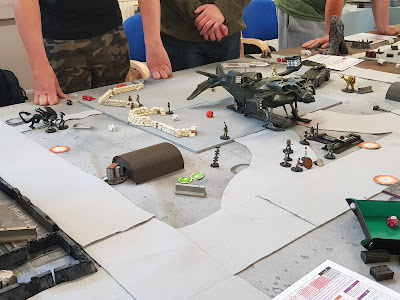 After much gunfire and alien lunges, the other squad lost a colonist and Ryders character, but retired with the other survivors.  Our squad despatched the warrior, but Paul was put down by an alien charge and then grabbed by the alien.  In close combat, Mick stunned the alien and then tried to pull him by his webbing towards the drop ship, eventually passing him to me to finish the last distance on to the drop ship ramp and we were able to close hatches and lift off. 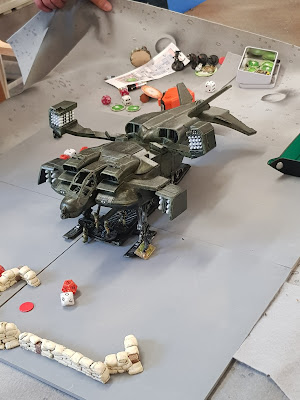 A great days gaming, loads of fun and the randomness of alien appearance points, quantities and ambushes kept us entertained through a full 7-8 hours of gaming.  A huge thanks to Dave for laying on most of the terrain and all of the scenario ideas and for playing the aliens so effectively throughout the day.  Emphasis was on team play, with each squad covering each others backs and then both squads covering each other to deal with multiple aliens coming in from every direction around the drop ship.  Thanks to Mick, Paul and Little Si for providing such good team mates and to Will, Nathan, Ryder, Phil and Dennis for such entertaining chaos at their end of the table.  All great fun.