The weekend of the 7th to 10th October saw those Cold War Commanders who could make it assembling at the Grimsby Wargames Society venue for a mega game of CWC 1.5 (not quite CWC 1 and not quite CWC 2).  It was an opportunity to get my French armor on the table, with a French armored division (really only a reinforced brigade) shared between two players, each getting an armored battalion and a mechanised battalion, with each also getting a uniquely French armoured car battalion mounting the same gun as their bigger tracked AMX-30 chums.  There was also a VAB motorised infantry battalion and another armored car battalion in reserve.

On my left was my French commander, to my right was a light infantry battlegroup of US paratroopers, with some specially airlifted Sheridans in support, betong them a unit of British armor/mechanized infantry and beyond them on the far right a US battlegroup with M1s.  The French were deployed behind a substantial river, with flooded banks.  On the first day of the Warsaw Pact offensive, an East German Motor Rifle batt attempted to fan out on the French side of the river and roll up the defences, but some good initial moves meant the French were able to push into some key wooded areas ahead of the East Germans, who could then make little headway into the ring of French armor, despite using pre-planned smoke as a screen. 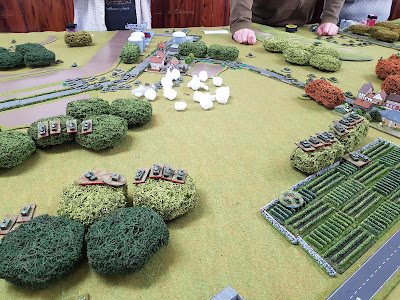 French mechanized infantry on my left flank in contact with French armor to their left - a solid defence against river crossing. 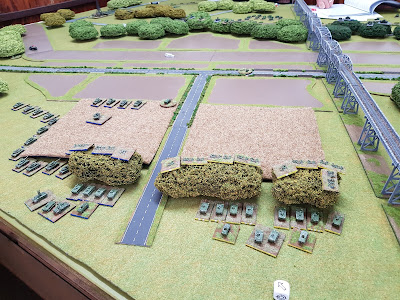 French armor holding trees on the flank of the little town thinly held by the US paratroopers. 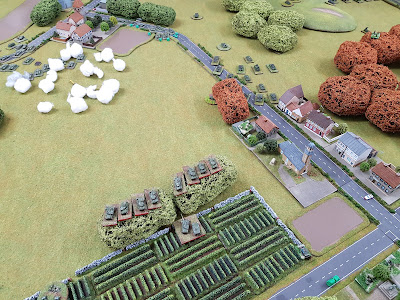 East Germans trying to close with the French. 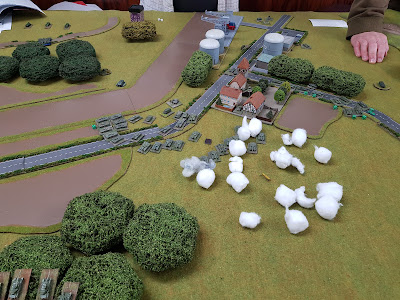 Waves of French coming up in support. 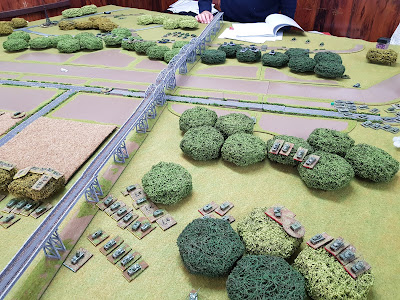 East Germans advance beyond the smoke and are punished by withering French fire. 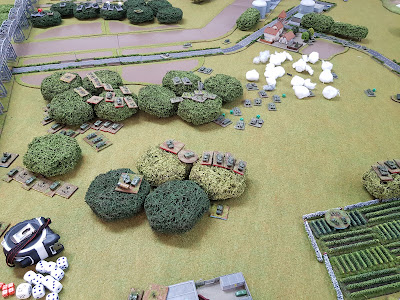 On the French right, armor and US ATGMs deal with another East German thrust. 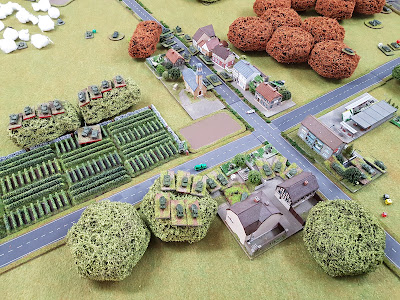 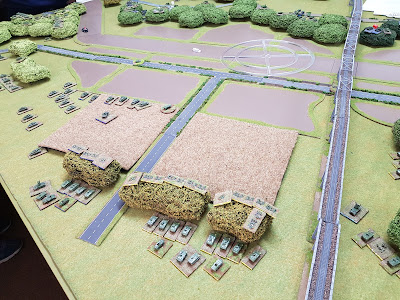 Overnight, the French on my left push amphibious mechanized infantry across the river and construct bridging points to allow the heavier armor across. 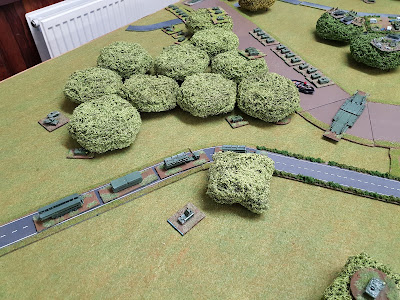 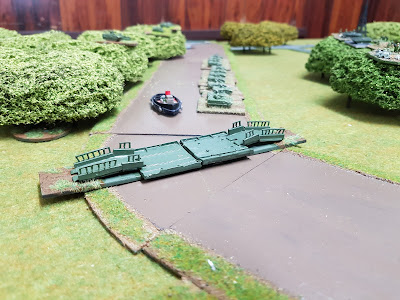 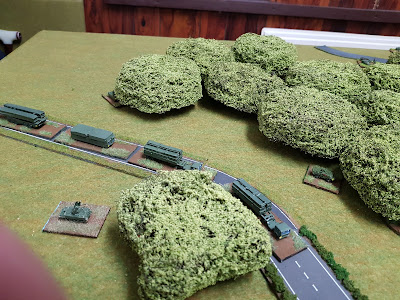 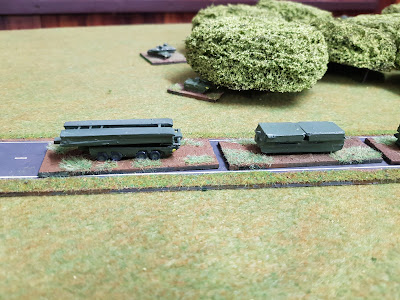 Next morning, the Soviets push infantry and armor forwards to try to pinch out the crossings. 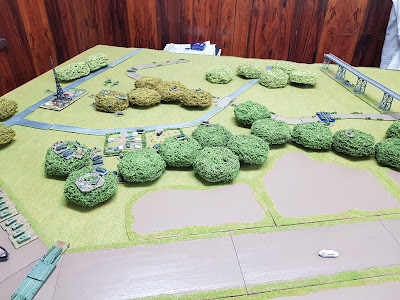 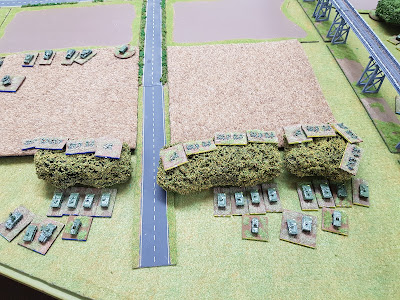 To my front, the French mechanized infantry consolidate their hold on the woods. 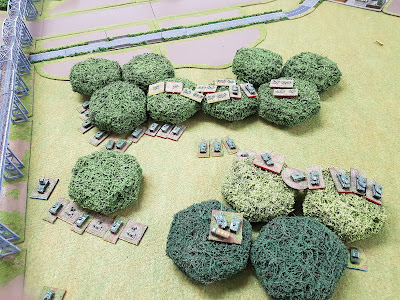 On my right, the US infantry look in danger, with a concerted WP effort to push through the boundary between them and the British.  To support, my armored cars moved into the town to form a secure firebase, while the French armor in the woods attempted to shift laterally to the right.  First turn orders weren't too helpful. 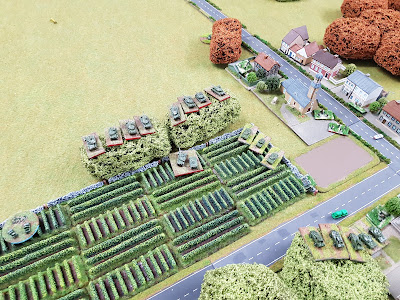 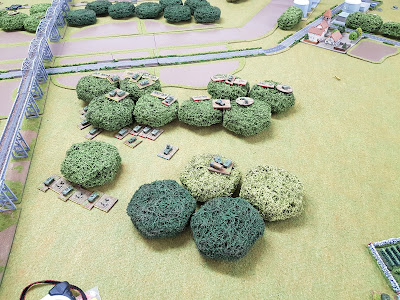 Eventually they got moving, just in time as the first Soviet tank brigade (in the far distance) was beginning to see the danger and swing to their right towards the new French menace. 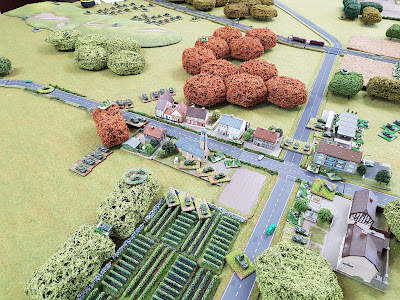 Sheridans slow to get moving as well. 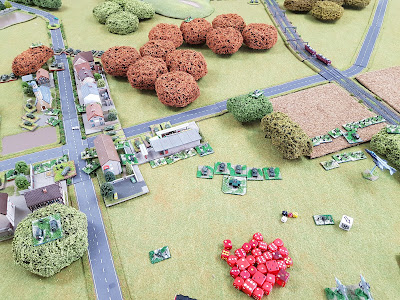 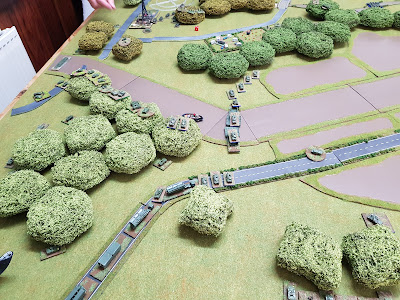 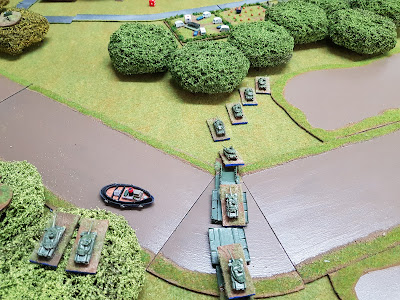 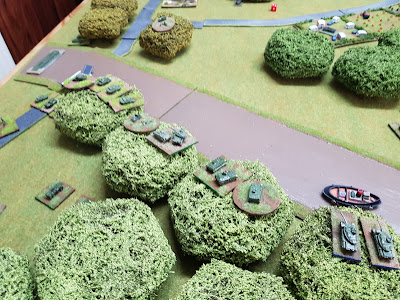 In the excitement of the last couple of turns, I forgot pictures.  The French armour on the right were unable to take up better firing positions in the woods, but were able to put multiple activations of fire into the lead Soviet tank battalion, effectively destroying in.  The second battalion was more canny and from hull down positions on the ridge took out most of the French armor with some long range help from the East Germans.  However, the danger had past and the British and US were able to contain the Soviet push.  But for how long?  Lots of fun, a great weekend with good company, good food and drink and lots of laughs.