Played a game of Saga Age of Invasions at the club last month.  6pts of my Late Romans vs 6pts of Dennis' Huns.

The plucky Romans deployed in line with infantry in the centre and cavalry to the flanks, in this case Gothic elite cavalry (3 x hearthguard units), pedyts (2 x warrior units) and sagitarii (1 x warrior unit).  The aim was to try to restrict the Huns movement by hemming them in with the Roman line. 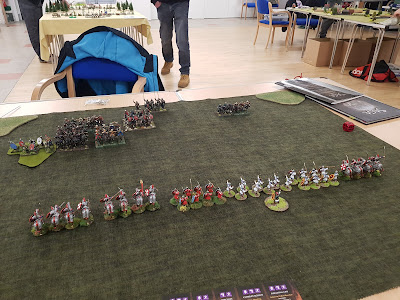 The Gothic elite cavalry on the left flank all geared up to charge. 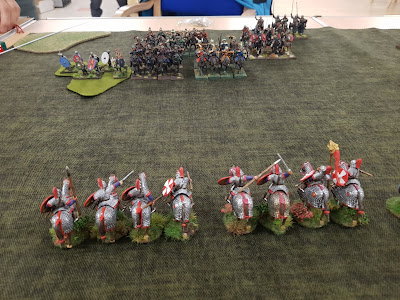 The Roman infantry and Goth cavalry on the right flank ready to try to push the Huns into the corner. 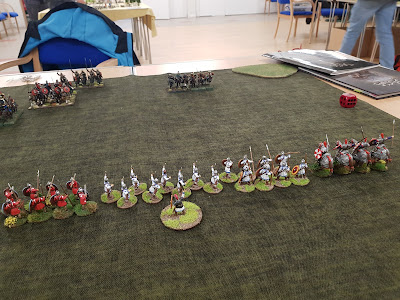 Alas, it was not to be.  With Dennis getting first activation, his light cavalry swarms dealt a death blow to one of the Gothic cavalry units on the left flank, from which the whole force never recovered.  The Huns swept around the Roman left, despatching unit after unit, with little harm to themselves, although one unit of horse archers was reduced to three figures. 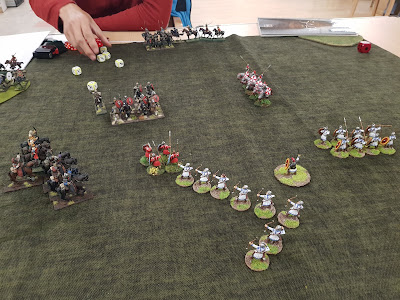 All in all, a disaster for Roman arms against the much more mobile Huns.  I foresee a need for the Romans to secure light cavalry of their own, plus consider using levy light cavalry to provide increased force size to help with the hemming in.