Today was Day 1 of the Gauntlet show organised by the Deeside Defenders at the Aerospace Club at Broughton in Deeside, near Chester U.K.  If you are around, it's on again tomorrow - lots of great games, a handful of traders and some Bring and Buy bargains.

Ian Shaw and I laid on a 15mm Napoleonics game using Quatre Bras as a basis for the scenery.  We decided to make it a "what if", with an initial historical deployment, but timing and types of reserves arriving according to a dice throw.

Initial deployment saw my infantry brigade (four infantry units, one foot artillery and a skirmisher unit of rifles) occupy the wheat field and form line around the Quatre Bras crossroads, with the rifles occupying the farm.  Low hills to the left were occupied by my light cavalry brigade (Hussars and Light Dragoons) 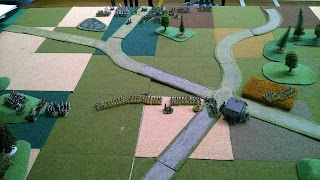 The French came on with two infantry brigades (each three battalions plus infantry gun), while their light cavalry brigade was pushed forward of the brigade on my left flank. 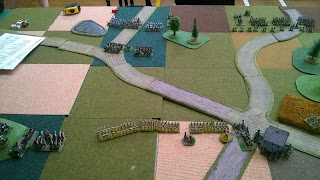 French initial movement on table, viewed from the French side of the table. 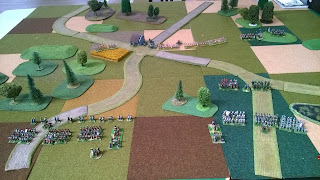 The French left flank - these guys are actually Swiss. 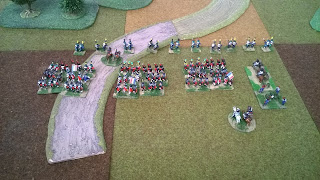 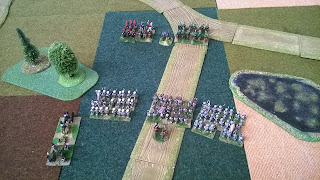 The British line, wondering if they had made a terrible mistake. 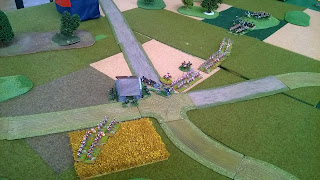 The opening moves saw the French especially unlucky in failing to gain reserves, while the British brought on the Union Brigade, which crossed flanks from the British right to their left.  Light cavalry clashes resulted in both sides retiring to lick their wounds and rally off hits, with the British recovering quicker and breaking the French Brigade on their left flank.  However, the arrival of fresh French brigades on both flanks and a Cuirassier brigade on the French left, which moved to counter the Union brigade, gave the French courage and they advanced on their left onto the the infantry regiment in the cornfield. An initial French charge turned into a melee, which lasted at least 3 turns, with the French supporting regiment shaken by fire from their flanks further along the British line.

The French initial attempt to take the wheat field. 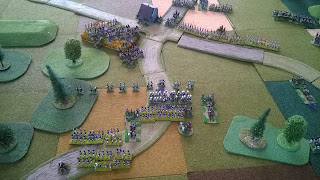 The French second wave taking up a holding position on the French right, with the Cuirassiers failing to relocate behind them. 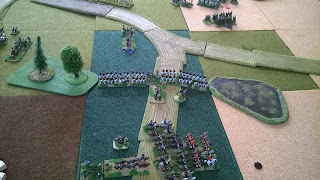 Shaken troops all around on both sides in the wheat field. 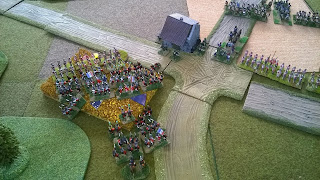 British reserve infantry brigade swinging around to support the fight in the wheat field. 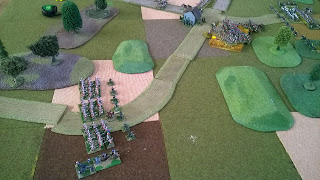 A smaller brigade of highland infantry advancing in support of the British line at the cross roads. 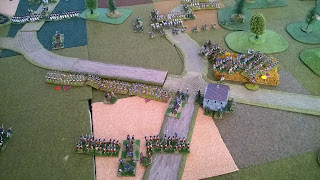 The Union brigade on the British left flank eye up Lancers arriving to their left. 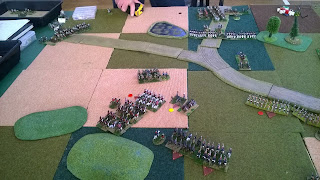 The original British line regiment in the wheat field has fallen back, but the reserve British battalion has units charging home, against shaken French units n the wheat field. 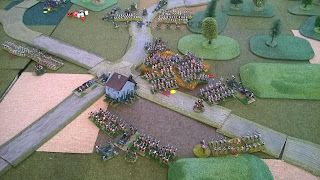 The lancers don't do too well against the Union brigade, losing a unit, although 2 of the Union Brigade regiments are shaken. 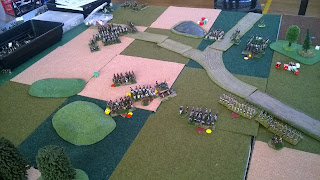 The melee in the wheatfield with the former defenders rallying in the foreground. 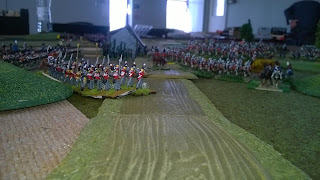 The final scene at Quatre Bras, with fresh troops on both sides effectively reaching a stalemate. 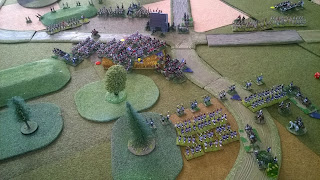 Lots of fun and, despite an ad hoc reinforcement schedule, a reasonably historical feel to the game.  Ian and I both agreed that we thoroughly enjoyed this game.

Other games being played were Ligny in 20mm (which I'm planning on joining tomorrow), Waterloo in 6mm, Kursk in 15mm, an H P Lovecraft themed card/map game and others, plus an ancients competition.

I'll try and remember to take some photos of the Ligny game tomorrow!

Thanks for looking.
Posted by Andy Canham at 19:31